Metallica frontman James Hetfield spoke in an interview with Metallica’s official magazine “So What!” and revealed the unheard story about Steve Harris of Iron Maiden. He said:

“Hanging out with the Maiden guys always brings back great memories. 1981 – possibly – hanging out in Hollywood, CA, driving around with [original Metallica bassist] Ron McGovney – me and Lars in the backseat.

“We saw Steve Harris walk down the street and us – dorky, shy metalheads [going], ‘Hey, Steve!’ And he actually turns around and starts walking towards us. We’re like, ‘Ah, ah, ah, ah.’

That was our first brush with somebody cool and famous – that always stuck with me. Steve Harris, a super-down-to-earth, really cool guy.

And nothing has changed. I mean, he showed up at the show that we did [in Quebec City]. It’s really cool when other musicians are hanging out, watching you do what you do – it takes to another level.

You kinda go to Olympic mode 0 you step it up. Our setlist was at least five minutes faster – Lars was so nervous: ‘Oh, my God! Steve Harris is watching me!’ ‘Does this part sound too much like Iron Maiden?’ Yes…

Usually, halfway through the show, you figure, ‘OK, he’s gone and he’s moved on to the next thing.’ But no – for the whole show he was standing there; the whole show, to the very end. And not only was he standing there the whole time, he got in the vehicles with us [laughs], came to the hotel with us – super-cool guy!

And then we got to go see them a couple of days later. And likewise, super hospitable there.” 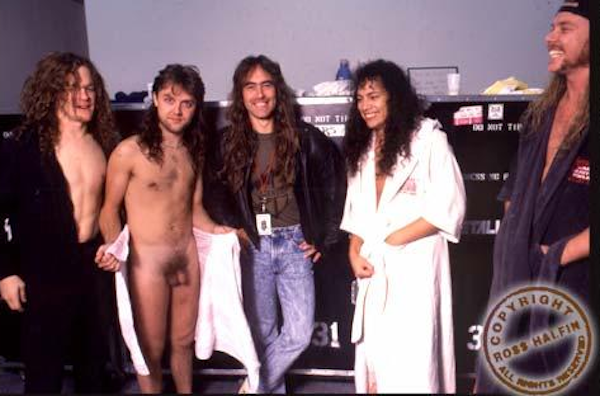