According to Kerrang Magazine’s report, british Nirvana fans are set up a Facebook event for a Nirvana reunion with Nickelback singer Chad Kroeger in 2019.

“The campaign starts here,” says the event page, which lists January 1, 2019, as the date this gig is hoped to happen.

As of Friday morning, more than 825 people indicated that they’re going and another 2,400 are interested. In the comments section, one person dubbed the group “Nickelvana.” Reactions to the idea are mixed. “This needs to happen,” wrote one. Another opined: “Epic.”

A fan named Rob commented, “You got the event title wrong! Change it to ‘Chad Kroegar from Nirvana’ :D”. John commented, “Can’t wait. I already know it’s gonna be the gig of 2019!”

Back in 2017 August, Dave Grohl has expressed his feelings in regards to the possibility of a reunion for the band. He said:

“I got together with my old bandmates, Krist [Novoselic] and Pat [Smear, now with Foo Fighters], and guests including Joan Jett and Lorde, and we played those songs again. It sounded just like it did, but of course with one thing missing. We hadn’t played a Nirvana set since Kurt died. Could we do that again? I don’t know.” 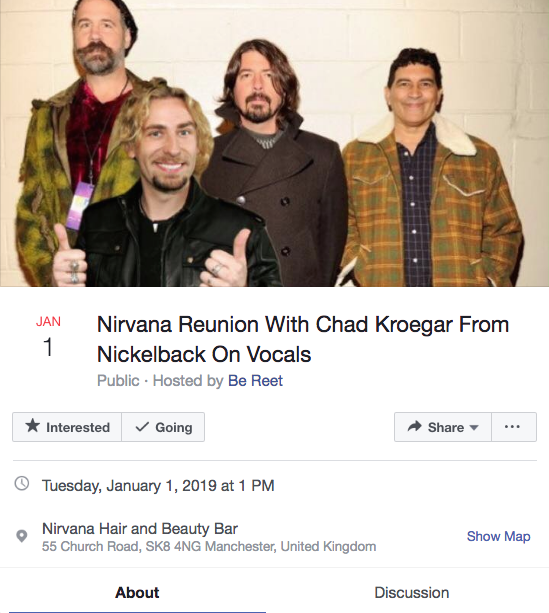