Jeff Beck’s untimely passing was shocking news for many, as the guitarist had just released a joint record with Johnny Depp and had other plans sorted out ahead of him. Robert Plant has struggled to accept Beck’s death, and the former Led Zeppelin frontman recently shared a message and paid homage to his late friend on Instagram.

“This is tragic news,” read Plant’s caption under the old photo from his and Jeff’s youth. “Hard to take in… Jeff always appeared timeless, ever-evolving. He embraced project after project with limitless energy and enthusiasm. He surfaced in an extraordinary time; he took his place side by side with the virtuosos of the period… his mates.”

He then continued by paying tribute to some of Beck’s most epic and appreciated collaborations. Plant recalled, “The [rock] scene was on fire; he introduced a cool template moving from Yardbird to Bolero to Truth, Beck-Ola with Rod, the perfect foil… The singer and guitarist syndrome, plenty of sparks, great results.”

Robert further appreciated how the guitarist had always been enthusiastic about taking on new projects and sent his thoughts to Jeff’s wife, Sandra. The singer noted, “He cooked up magic through all the passing eras, always up for the next, unknown, unlikely collision, back in time to homage Cliff Gallup, forward to Johnny Depp. His gift was enormous. He was funny, challenging, and eager. My feelings are with Sandra today…”

Beck’s passing shocked Plant and many others, as the guitarist had always been eager to work on new music and plan future gigs and other projects, so it was a struggle for Robert to accept his late friend’s passing. He wasn’t the only one, though, as the singer’s Zeppelin bandmate, Jimmy Page, and Pink Floyd icon David Gilmour also shared tributes on Instagram with emotional notes. 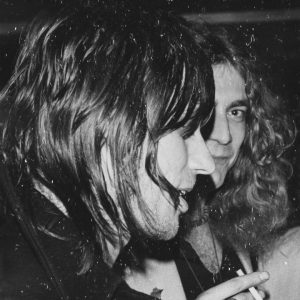